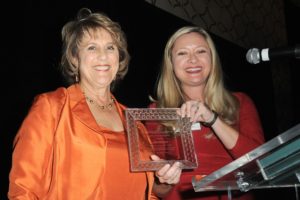 This year’s Spirit of Voluntarism Awardee was Ellen Weitman.   During the Harvest Boutique luncheon Ellen was recognized for devoting more than 34 years of service to the Junior League of Los Angeles.  Ellen, who joined JLLA in 1980, has held a number of leadership positions, including Chairman of the Ways and Means Committee, Community Director (when Public Policy was still part of Community Council), and Membership Director.  Ellen was also Chairman of the Community Forum when the League was working with school-based health clinics. She also oversaw the marketing, promotion, and distribution of the League’s Cookbooks.

At the Harvest Boutique Ellen reflected upon her most memorable experiences with the League.  Among these was her time as the Community Director when she learned about state and public affairs, as well as the Los Angeles community and its Leaders.  She lit up with the memory of leading the effort to produce and distribute the League Cookbook.  In her words, that was an “unbelievably big job.”  She quickly added that it was all “worth it” because the leadership and training skills she’s gained from the League have helped shape her life.

Ellen graciously credits the League with giving her the skills and confidence to achieve success in her professional life and affording her the courage and leadership to partner with her husband to run their family business. She compares serving in the League to getting a college-level education on how to make the world a better place.

We are grateful to Ellen for her continued support through numerous leadership roles as a Sustainer, including Sustaining Advisor, Sustaining Director, and Advisor to JLLA Past President Linda Small.

Outside of her League commitments, Ellen and her husband, Doug, have raised two sons and fostered a young relative beginning at age nine.  The couple has also developed several successful businesses. JLLA is thankful for Ellen’s dedication of service and was delighted to honor her this year.